Over the last handful of days, India’s capital of New Delhi has been forced to come to terms with a stark reality. Since waking up Tuesday morning, the city has been shrouded in a mask of hazy pollution that’s only been getting worse as the week’s gone on. Now, the usually dismissive Delhi government is actually starting to take action, and their late response is coming at the expense of their hundreds of thousands of citizens.

After acknowledging that the ensuing visibility was a liability to the citizens, flights have been delayed, trains have been canceled, and an increase in car accidents have been the result.

On top of this, city officials canceled both public and private schools in order for kids to remain indoors by the end of Tuesday. Wednesday saw the government discontinue civil construction products and put a ban on trucks coming into the city, and on Thursday, new measures have been set forth to put a partial ban on private car usage beginning next week.

By the time Friday rolled around, the seriousness of the situation escalated from implementing practical measures, to expressing legitimate health concerns. With the World Health Organization deeming any air quality rating over 25 to be unsafe, it’s extremely alarming to know that New Delhi’s quality exceeded 1,000 at one point this week. 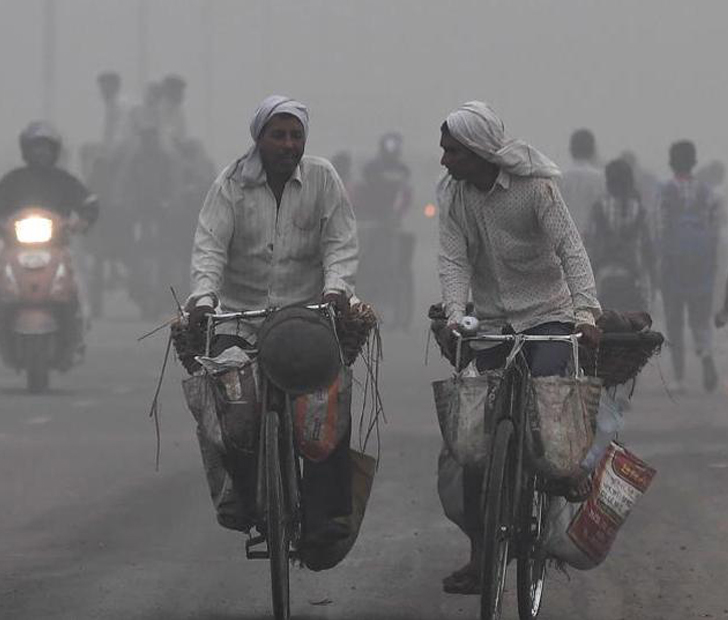 The measurement is based on the concentration of fine particulate matter, which is measured by cubic meter. The particles are especially hazardous because they can reach a person’s lungs, becoming stuck and passing through organs and creating further health risks.

As a result, the sales of both protective face masks and air purifiers have experienced a serious boom in purchases, but not all citizens are able to afford these kinds of safety measures. For those who are not wealthy enough to purchase these items, they’ve turned to homemade solutions like handkerchiefs or scarves.

According to the Berkeley Earth science research group, breathing in air that has a quality rating that’s anywhere between 950 and 1,000 is equivalent to smoking 44 cigarettes a day. And with that sort of effect, it’s no wonder more people are seeking professional medical attention.

“The number of patients have increased obviously,” said pulmonologist Deepak Rosha. “I don’t think it’s ever been so bad in Delhi. I’m very angry that we’ve had to come to this.”

Experts believe that the main causes of Delhi’s pollution are vehicle exhaust, road dust, and smoke from crop burning and garbage fires. The chief minister, Arvind Kejriwal, took to Twitter to describe the city as a gas chamber.

What do you think about the conditions in New Delhi, India? COMMENT below with your reactions, and SHARE this article on FACEBOOK to spread this startling news!