This Fingernail Marking Means You Need To Get Checked for Cancer, ASAP

There are many different markings you can get on your fingernails, and all of them mean something. But one specific vertical stripe is much more serious, as one manicurist found out.

When a woman visited Jean Skinner during a walk-in appointment a few weeks back, she asked the manicurist for a color that would help her cover up a thick, black marking that had appeared on her nail.

Though past nail salons had diagnosed the woman with things such as blood blisters or calcium deficiency, Skinner knew this was a much more serious sign — it was a lesser known symptom of Melanoma, one of the most dangerous forms of skin cancer.

“I did not want to frighten her, but I told her she needed to see her doctor immediately! She called me today to tell me that yes, it was a very aggressive melanoma that has already spread to her lymph nodes,” Skinner posted on Facebook.

“Please pay attention to abnormalities in your nail beds!! Odd changes in your nails can very likely be nothing to worry about! But sometimes it is an indication of a very serious disease,” she added.

Skinner had additionally shared a photo of her client’s fingernail in order to spread awareness. She was granted permission to do so in hopes that more people would become informed regarding the seriousness of such a marking. 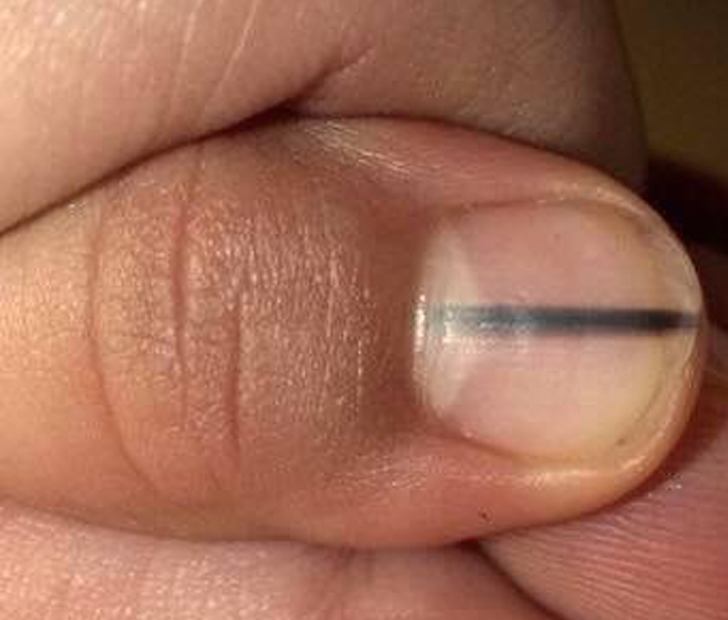 She further insisted that you should monitor these sorts of changes in the nail beds of the elderly as well, as they may be unable to notice these changes on their own.

Melanoma can be an extremely serious disease, and those who suffer from a prognosis are encouraged to seek medical attention as quickly as possible. The form of skin cancer occurs when pigment-producing cells that give color to the skin become cancerous.

“Early diagnosis can make all the difference in the world,” Skinner concluded in her post.

Do you know anyone who may have seen similar markings on their nail beds? Please SHARE this article to raise awareness about this sneaky symptom, and COMMENT below if you have any additional tips on handling melanoma.